Watching people arrive at a Patagonia’s natural behemoths and instantly whip out their pole mounted GoPros to start taking selfies, you have to wonder whether we’d all just be better off if the camera was left at home (or at least the pole). The sense of having to have ‘something to show’ for the trip and upload to Facebook is a trap most of us of the digital age tend to fall into, not least of all me. I had thought, therefore, that my recent reduction to ‘cameraless’ status might somehow be a blessing in disguise; a burden removed, leaving nothing but to soak up the raw experiences and incredible sights. I was wrong. What I’ve come to realise is that, for me at least, photography has became a truly integral part of the trip; something that lets me express what it is about a place that interests me, as well as providing a much needed outlet for creativity (keeping at least a few of the brain cells on the left side busy, whilst the others slowly die of boredom).

This little post has therefore sprung into being as result of these musings, covering some recent highs of the trip photography and paying respects to a fallen hero. 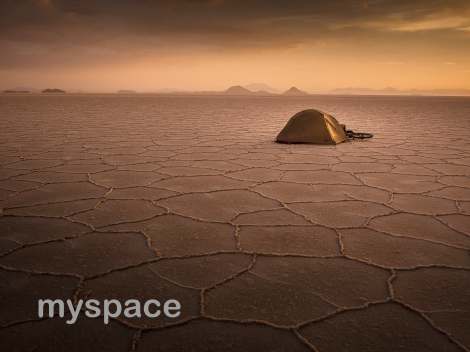 Having served in Europe, Africa, Asia and now the Americas my trusty Olympus has finally given up the ghost. With a shutter count that would put a paparazzi to shame, it’s certainly seen some field action, along with no amount of abuse on my part. The list of problems is extensive, ranging from smashed LCD display, to missing aperture dial and a general mind of its own when it comes to deciding which shooting mode it’s in. Throw in a dodgy power connection, requiring one to adopt a rather unorthodox hold position with thumb forcing battery in place, and you’ve got the makings of a brilliant eBay listing. Battling on despite these injuries though, it ironically took the bizarre theft of the charger in Chos Malal to finally bring this workhorse to it’s knees.

Eeking out remaining battery life over past weeks, with a new charger en route via the Argentine equivalent of eBay, I’d hoped business could continue as normal. But with the new charger turning out to be a dud, and having probably blown my chance to get one sent internationally in time, I’m now effectively without a camera for the remainder of the trip. A bit of a blow I have to admit. That said, before reaching for the ‘unfollow’ button, with any luck the blog won’t be completely devoid of imagery going forward; I still have a semi-functioning phone and I’ll be sneaking some shots on Sam’s point and shoot when possible. 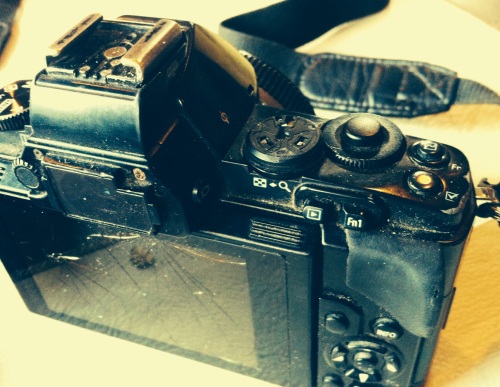 Used and abused, resale value zero, this is still my most treasured bit of kit.

What I roll with; Olympus OMD EM5 body with 14mm Panasonic, 20mm Panasonic and 45mm Olympus lenses. Interestingly (or not) I don’t have a zoom lens, but if I had more cash I’d buy a good one to replace the three primes; constantly swapping them out is a nightmare on a bike trip, with the sensor becoming an absolute dust magnet. That said, this is a brilliantly compact setup and I’d recommend the micro four thirds system to anyone doing a bike expedition looking to take decent photos. You’ll struggle to match SLR sharpness, but the size and weight difference is massive. With a pancake lens like the 14 or 20mm you can easily stash the OMD in a jacket pocket, and it’s electronic viewfinder largely solves the previous drawback of mirrorless systems. I reckon you could pick up all of the above for $1000 off eBay, which I think is very reasonable if you’re serious about photography, but don’t want to run the risk of having a load of expensive gear stolen or broken. I’m sure to buy another OMD to replace this one at some point, possibly the tasty EM1 if funds allow…

Whilst I’m gutted not to have a ‘proper’ camera for Southern Patagonia, with the likes of Monte Fitzroy and Torres Del Paine taunting me, I’ve had a good run, being fortunate enough to photograph some truly incredible places, well off the usual tourist itinerary. Last month, shots from Peru’s Cordillera Blanca and Huayhuash made it into the Adventure Cycling Assocation’s annual photo contes, rolling in in 2nd place and bagging two of the runner up spots. Some shots are also featuring in and on the next issue of Bicycle Travelers magazine (along with probably the least factual article on stoves anyone’s cared to write). 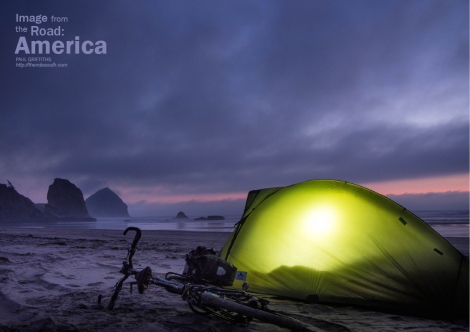 Blast from the past; prohibited Oregon beach camp, Oct’13