Southern Patagonia, last stop before Tierra del Fuego. A harsh, but overwhelmingly stunning part of the world, drawing tourists in their droves each summer with such spectacles of nature as Torres del Paine and the Fitzroy Massif.

With so much hype and unpredictable winter weather starting to roll in, it could easily have been a massive anticlimax, but was instead a thunderous crescendo. An awe inspiring encore as the Andes finally run out of land. Perfectly timed breaks in the weather, an absence of crowds and the general immensity of the landscape made for a very memorable couple of weeks. In the eloquent words of an American tourist we met; “Patagonia is the shit!”.

The general theme of our time down here has been to tick off the ‘big hit’ destinations, interspersed with head down stretches on Ruta 40, blasting across the wind swept pampa. Very much a tale of two halves; towering spectacles of awesomeness on one hand and the barren, rather tedious world of pampa on the other.

These pampa sessions have served a purpose though, providing some welcome time to simply plug in, zone out and let the mind drift. As someone who can barely sit still for a minute, this kind of riding is about as close a taste of zen as I’m ever likely to get. With the end of the trip now imminent, signalling big change up ahead and a new set of challenges, there’s a lot to mull over. Emotions are mixed; excitement tinged with fear. Fear of leaving a lifestyle that now seems so natural and reintegrating into the ‘real’ world. How hard will it be to remould this nomadic existence back into something resembling normality?

In an effort to drag the blog up to date, this is a quick summary of the highlights of the past couple weeks.

Thanks again to Sam for basically giving me free rein with his camera and also to Kate for letting me crack out a few shots with hers.

Some way off the Ruta 40, this mountaineer’s paradise and Patagonian gem was close to being bypassed in our bid to press on southwards. Horizontal rain greeted us at the junction and motivation to ride this ‘out and back’ detour had sunk to something close to zero. Still clinging to the hope that the elusive Cerro Fitzroy may reveal itself though, we decided to compromise and try and hitch up there. Five hours later, bikes long since stashed in a ditch (ditched?), one of the few vehicles to pass finally took pity on the two shivering wrecks squatting by the side of the road. To any hitchhikers out there, you have my complete respect! (Ironically it took us less than 5 minutes to hitch back out again on a nice sunny day…)

As the little tourist hub of El Chaten continued to be battered by the unrelenting storm, with stories abound of bridges washed out and trails impassable, it looked like the whole Fitzroy mission may have been in vain. But miraculously, on the second day things start to clear; all eyes are fixed on the sky, everyone urging on the small patch of blue that’s managed to penetrate the grey abyss. “This is it!”, “now’s the time”, a flurry of activity follows; maps poured over, plans of action hastily drawn up, hostel bookings cancelled, time to pack up and head for the hills!

We join forces with Tasmanians, Kate, Amy and their dad, Nigel, awkwardly strap on camping gear to our flimsy ‘fold away’ backpacks and take to the trails for an overnighter. Brilliant company and the incredible Fitzroy massif seen in all it’s glory made for a memorable little foray. 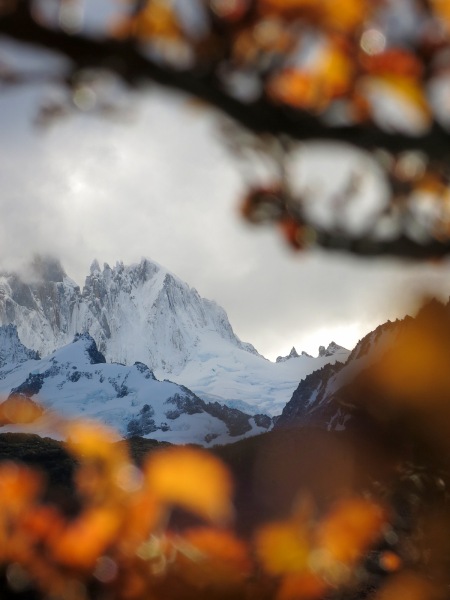 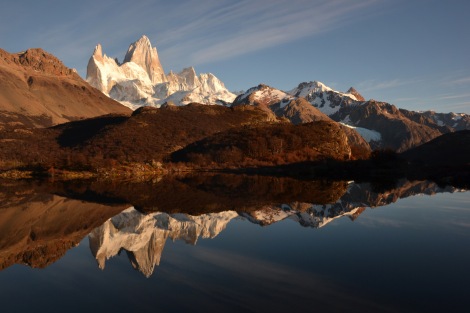 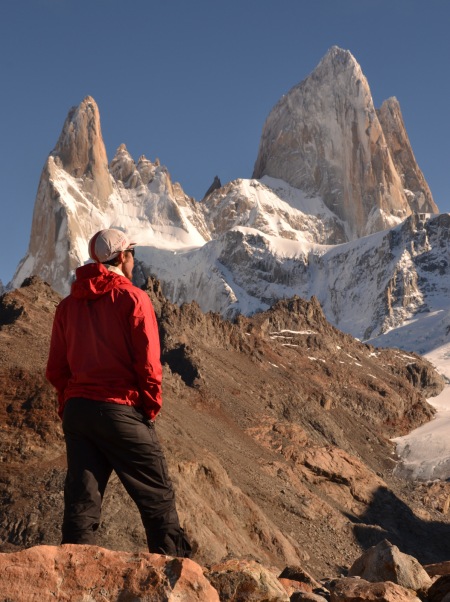 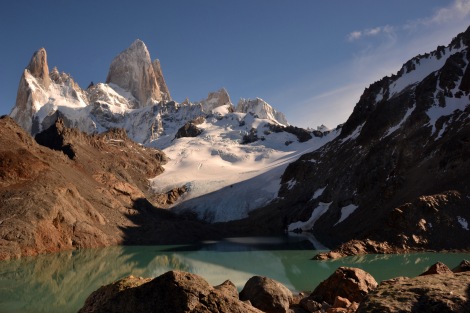 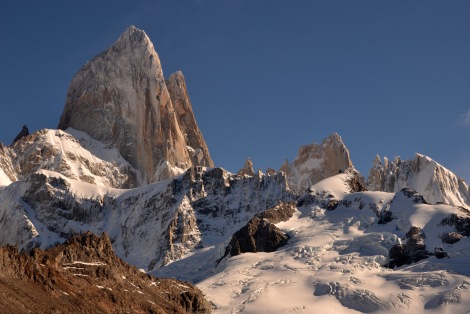 Ruta 40 and The Pampa Sessions

A means to an end and chance to let it all sink in. Subconsciously shifting through gears, a vast expanse of nothingness, attention occasionally restored as a quirky rhea darts through the undergrowth like something out of Jurassic Park. 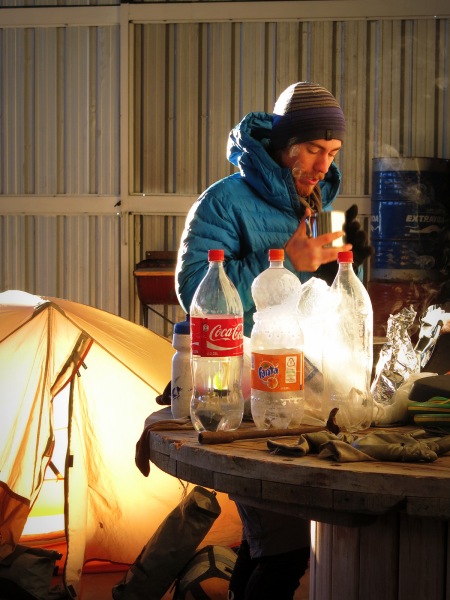 Seeking shelter from the winds at a construction workers depot. 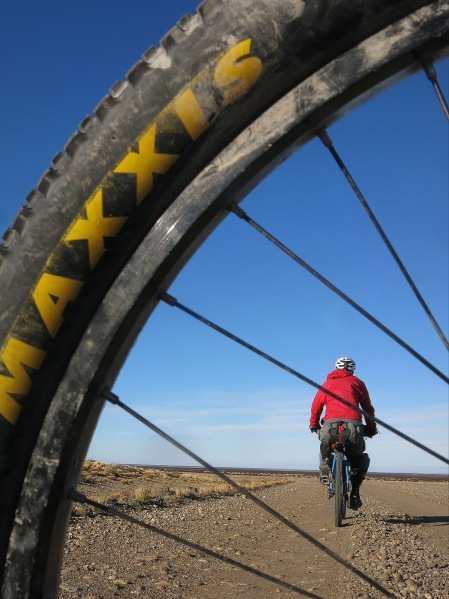 Zen and the art of pampa riding 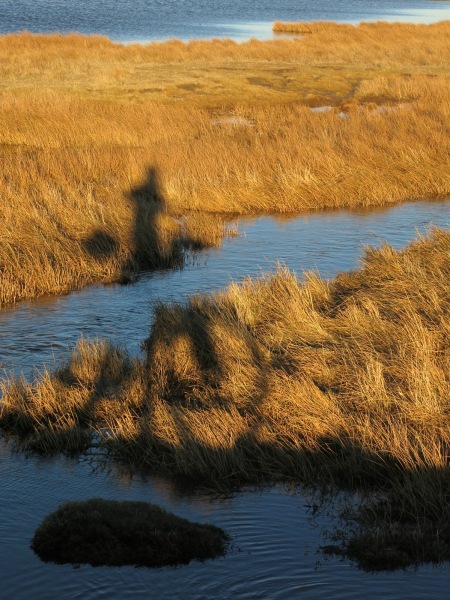 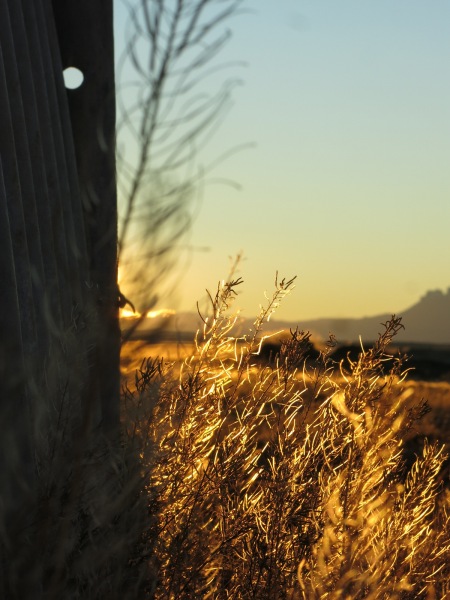 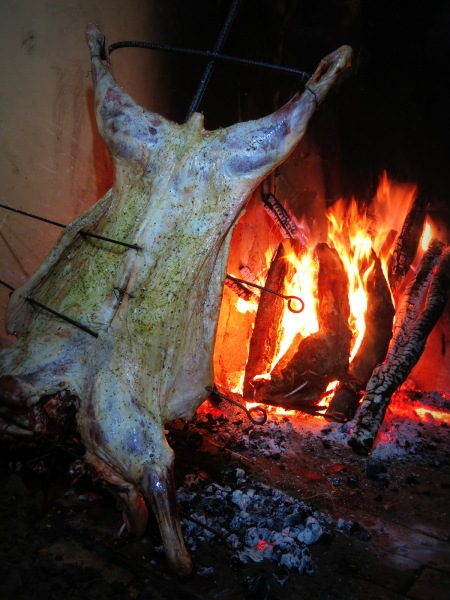 Grandaddy of Patagonian attractions. Crossing back into Chile at Cerro Castillo we embark on combined biking and hiking exploration of this fabulous national park. Once again the weather looks set to disappoint and then, against all odds, we end up with a run of beautifully clear days. We are sure to pay for this soon… The last of the autumnal yellows, crisp air, reduced winter entry fees and basically having the park to yourself; ‘out of season’ definitely has it’s benefits. Without wanting to risk descending into a generic “everything was awesome, are you jealous yet?” travel blog, this was, for me at least, everything I’d dreamed Patagonia would be. A fitting crescendo before the final push through Tierra del Fuego. 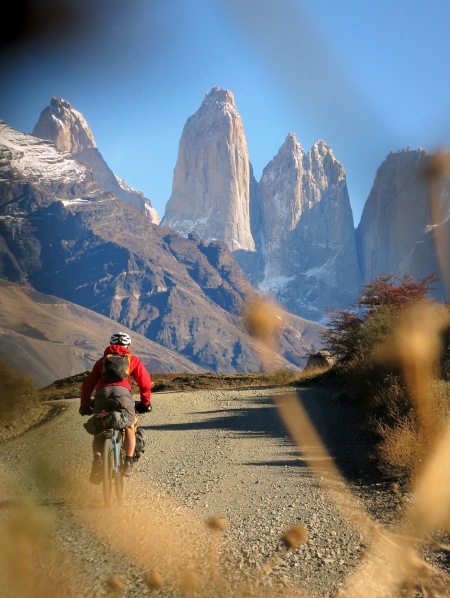 Closing in on the iconic ‘Torres’ 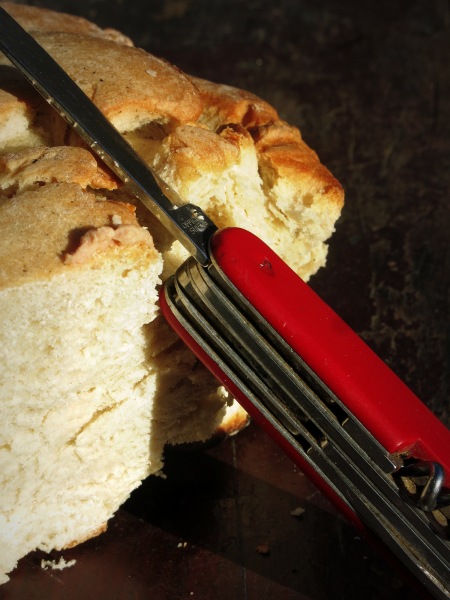 Bikes stashed and, like a very slow triathlon transition, we convert to our rather awkward ‘backpacking mode’ and hit the trail. Thanks to friendly park ranger Julia for this humongous lump of home baked bread. 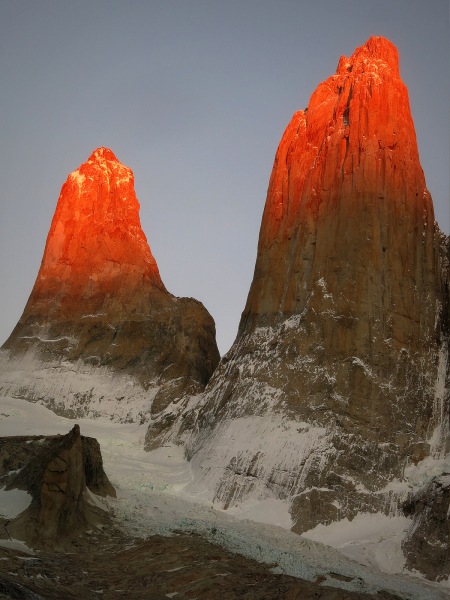 After a chilly night at Campamento Torres and equally chilly dawn ascent to the mirador we’re treated to a magical display as the sun hits the towers. 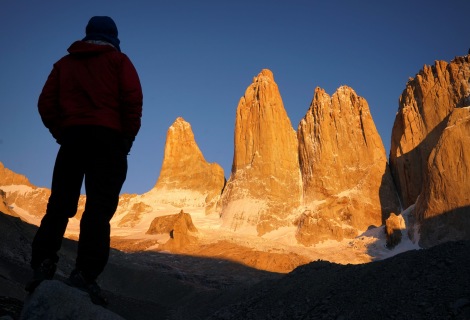 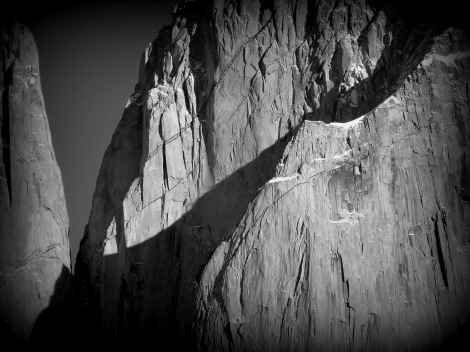 The off the bike shoes, like most of my belongings, have seen better days…

After hiking back down to the bikes and obligatory period of faffing, we don’t hit the road again until late afternoon. The plan’s to make it to Campamento Pehue, but with a fierce headwind slowing progress we soon find ourselves riding in the dark. Layered up to the max, with a full moon illuminating the mountains, this was a quite a surreal stretch on the bikes. When we eventually roll into Pehue and find that, contrary to expectations, it’s not free to camp, rather an extortionate $15, the decision to keep on riding into the night is not a hard one. Despite the bitter cold, this was evolving into a pretty epic night ride, an unconventional, but strangely rewarding way to take in this behemoth of a national park… 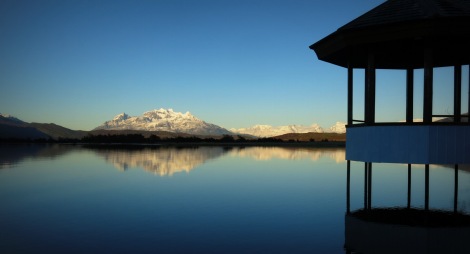 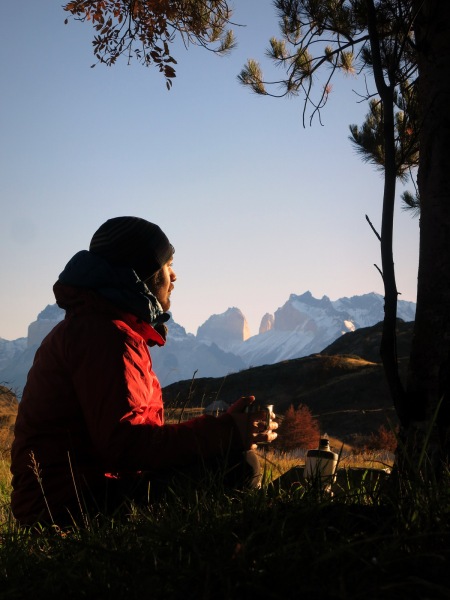 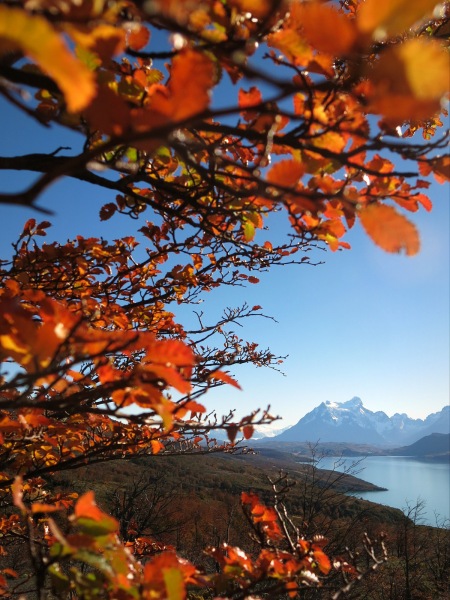 One last look back as we blast to Puerto Natales….

Patagonia, it’s been a pleasure.