The ‘Lagunas’ route is a veritable classic in the world of adventure cycling. A tough stretch of desert riding through Bolivia’s rugged southwest corner ending at the Chilean border, all set to the backdrop of a series of impossibly coloured lakes and mountains. Tales abound both of otherworldly scenery on one hand and countless frustrating hours pushing through sand on the other. This is definitely a route where the rewards have to be worked for….

Traditionally considered a 10-day ride, with my anything but traditional set up I was able to trim this down to a less daunting five, and, for the most part, avoided the dreaded sand pushing. If ever there were a case for riding fast and light, this route would be it. That’s not to say it was plain sailing though, it was still a bloody tough ride, with a series of mechanical issues complicating things further. The chief offender being the welded up seatpost, which was quick to throw up it’s hands in defeat at the first hint of the notorious Bolivian washboard (truly a surface to behold) and so the riding alternated between more out of the saddle nonsense and what I’ll term ‘downhiller’ mode. The latter being a case of using what remained of the seatpost to achieve a saddle height way below where it should be. Either way, the knees took some serious abuse… As a cycling ‘purist’ this would ordinarily have frustrated me greatly, seriously messing up my feng shui, but with such consistently incredible landscapes on offer it was hard to stay grumpy for long….

The first day out of San Juan wasn’t exactly a brilliant start, the standard route across a salar wasn’t possible due to the previous night’s heavy rain, so a not insignificant detour was called for via Avaroa. More rain featured throughout the day… was the rainy season finally starting??

Fortunately not, the next morning I awoke to blue skies which stayed with me for the remainder of the Bolivian leg 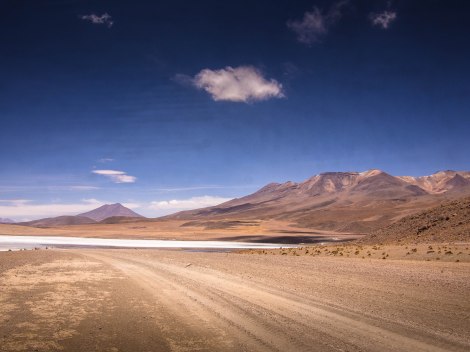 Day 2 was when things really kicked off and the desert riding/laguna gawping commenced. This also signaled the start of the crossing of paths with the multitude of tourist jeeps, who basically cover the same route. Generally zooming past me honking and waving, it came as a bit of a surprise to actually overtake one on the first rocky descent…. jeeps 100, bike 1!

According to tradition I’m supposed to rant about the jeeps at this point and to be honest it wouldn’t be hard to do. There are literally hundreds of them, speeding through the desert ferrying tourists from one photo opportunity to the next. As a cyclist caught up in this whirlwind it can sometimes be quite a strange experience, gone is the solitude usually associated with wilderness riding, replaced instead by an almost safari like atmosphere where you’re part of the show. Jeeps would often pull along side, windows wound down with zoom lens poking out at you. All a bit different. You can almost imagine the tour guide’s dialogue with his bemused party;

“Now on our left we have a travelling cyclist, known to roam these parts during their seasonal migration from Alaska. It looks like we’ve got a solitary male here and by the state of him I’d say he’s been on the road a while. Best not to provoke him too much, they’re an unpredictable bunch, but we generally find offering them a bit of food settles them down.”

“Oh they’ll eat anything, this one probably hasn’t seen a good meal in days….”

And therein lies the overwhelming positive to the jeep situation; free food and water. Offers abound, from beers being handed out the window to being invited to join them for a buffet lunch. Once I’d figured all this out, I found myself asking jeeps for directions despite knowing exactly where I was going, simply as a means of initiating the inevitable barrage of food and drink offers… Brilliant.

Laguna Canapa; more flamingos than you can shake a stick at

And then onto Laguna Hedionda 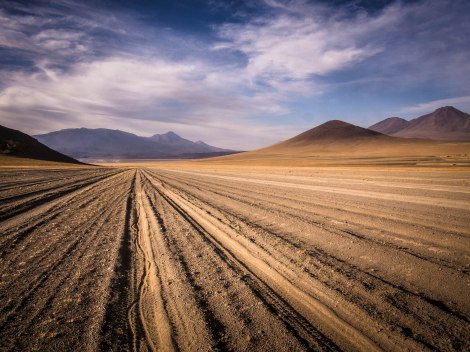 Pick a track, any track

Given the ferocious Altiplano winds finding a sheltered enough camp spot can be quite a challenge, this one did nicely though. Possibly the clearest view of the stars I’ve ever had to boot. The renowned Atacama observatory isn’t far away and it’s pretty obvious why…

Back in the slow lane. High volume, low pressure tyres are where it’s at if you actually want to ride this route.

Does this count as a selfie?

And on to the ‘Arbol de Piedra’. Note saddle in downhill mode, ready for a 5ft drop off should one appear… (or at least the bike is)

I’m not a huge car person, but I have a deep respect for LandCruisers, especially the old ones. From the Middle East to Africa and wherever else my travels have taken me, these are the vehicles of choice when the going gets tough. Land Rovers may have the traction, but these guys have the reliability.

After a night spent on a hallway floor of a refugio at Laguna Colorada it was back to it, this time grinding up a 4900m pass. This route really has it all…

Come 12 o’clock and the familiar westerly blasting commences, whipping up mini twisters and sand storms all around 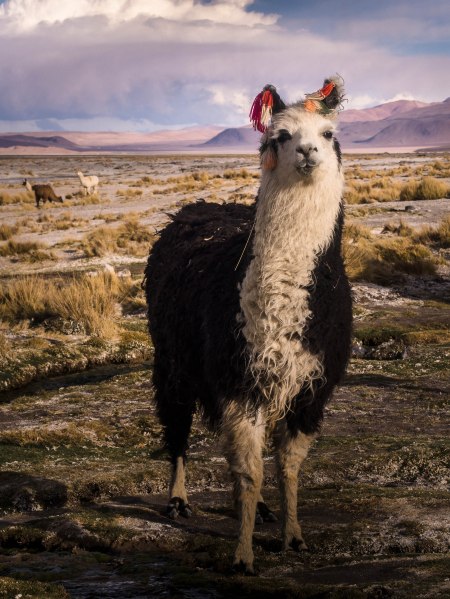 An early finish sees me reach Polques in time to spend a large part of the afternoon wallowing in the incredible hot springs, with just this chap for company and a 2l bottle of coke to keep me awake…. 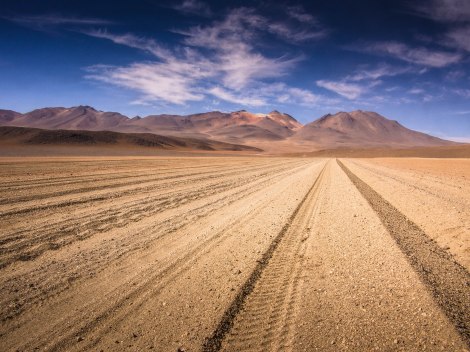 Day 5 was the final push into Chile, which saw me pass through Desierto Dali in the morning 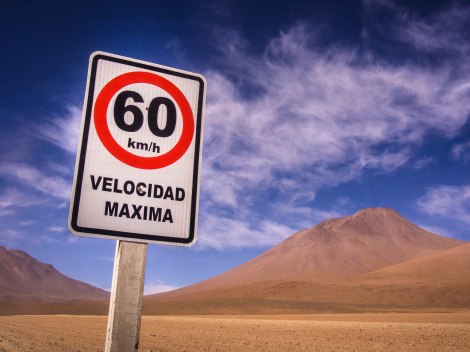 Yep, not much risk of exceeding that, 10km/hr is good going in these parts 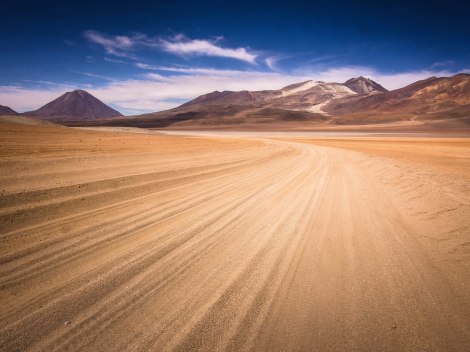 One last display of stunning landscapes and lagunas, before crawling towards the border post against fierce headwinds…

Then into Chile! All that was now left was a 42km flying descent on asphalt down into the tourist oasis of San Pedro de Atacama, where my exhausted arrival came as a complete culture shock. Well-dressed tourists, clean streets, new cars and basically everything a gringo could desire (except a 27.2mm seatpost…), this was all very different….

The TKguide is pretty much all you need. Route finding is easy, just follow the jeep tracks, but you obviously need to plan water resupply points and possibly also camping locations. There’s a shop at Laguna Colorada with everything you are likely to need; pasta, tinned food, salsa, buscuits etc. Don’t bank on averaging more than 10km/hr. If riding light with sensible tyres it is possible to ride it all, I pushed only a matter of metres, but I managed to avoid what I believe is the worst stretch south of the Hotel Desierto turn off by going way to the east of the main track. This was done on the advice of a jeep driver, basically at the hotel turn off bear left and follow the series of tracks up away from the main track. The further away you can get from it the better, I was probably about 1km to the east of it, then everything rejoins just past the rock outcrop around 10km south of the turnoff. Finally, if you’re travelling heavily loaded with four panniers and road tyres, I’d think long and hard about doing this route. I know it seems like ‘everyone’ does it, but I can only imagine how unenjoyable the riding/pushing would be…

Here’s my 5 day itinerary, which I think works well if you’re heading south with a light dirt setup and are a reasonably strong rider. All are full days with the exception of Day 4 (to capitalize on the hot springs…).

Day 1 San Juan to camp just off the International Road about 18km from the lagunas turn off (70km ish) Note: This is longer than normal because I had to detour around the salar

Day 2 Ineternational Road to camp at 4500m ish on the climb after laguna santa cruz, about 10km before Hotel Desierto turnoff (65km)

12 responses to “Riding The Lagunas Into Chile”