Back in Blighty, during what could loosely be coined the ‘preparatory phase’ of the trip, I had no real idea about actual routes. Back then it was all just tedious detail that distracted from the real task at hand; daydreaming. That said, it was always a given that I’d be following the spine of the Andes and similarly, there was never any doubt that I’d be riding Bolivia’s salars. Ever since reading about Humphrey’s naked escapades, a brilliant tale of tomfoolery backfiring, it was firmly on my hit list.

The Salar de Uyuni, the world’s biggest, is the one that gets all the attention, but my plan was to ride ‘the double’, linking it up with the neighboring Salar de Coipasa. It’s a classic route, but in the name of exploration I thought I’d try something a little different and had my eye on a cheeky shortcut between the two. As often tends to be the case with these things, it didn’t quite go to plan, resulting in a snapped seatpost and a mild case of dehydration… These hiccups aside though, it was a truly unique and surreal ride, one where Mother Earth makes it clear who’s boss and how very small you really are… 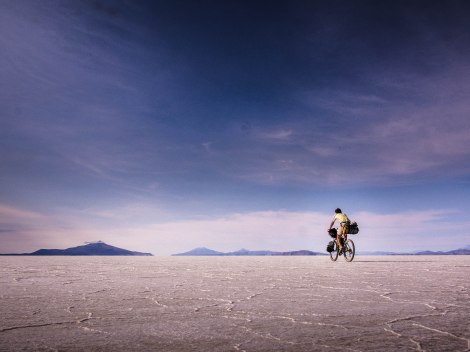 Setting off from Coipasa village it’s straight onto the salt. Mirages initially panic me into thinking the whole thing’s flooded and I’ve left it too late (which in theory I have), but each time they’re followed by an “oh wait, it’s all fine!”.

Coipasa, the ‘little’ one, proves easy work, with a silky smooth surface and a nice big hill to aim for, making navigation a doddle

Before long I’ve struck land on the other side and find myself in the village of Tres Cruces where the only shop is conveniently closed. 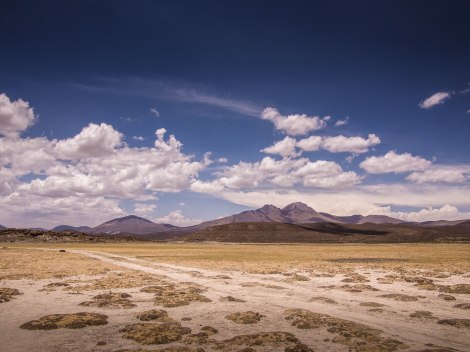 From here rather than detouring to the village of Llica as per conventional wisdom, I instead plough straight across this ‘land bridge’ via a cracking little dirt road….

And then a short stretch of singletrack to directly access the Salar de Uyuni. 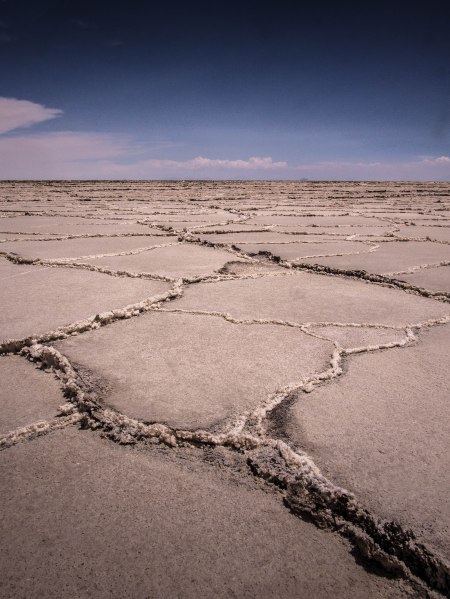 My plan starts to unravel however, when I discover that this Salar doesn’t exhibit the same silky smooth surface as Coipasa. It’s as if cowboy builders had been brought it to do this one and concrete like ridges made cycling a nightmare. Still, onwards I plugged towards Isla Incahuasi (the tourist island over 70km away), fighting a fairly futile battle to maintain some form of momentum.

An hour later and the battering had taken its toll. What you’re looking at here is a broken seatpost, quite an integral part of the set up, especially when a large portion of your luggage is supported off of it. Should have really adhered to that ‘minimum insertion’ limit….

As locations go, this could hardly have happened in a worse place; the middle of the world’s largest salt flat, way off the frequented routes. A year or so ago I would probably have sat down and had a little cry at this point, but given the amount of sh*t I’ve had to deal with on this trip so far, these little dramas start to pale into insignificance. In a couple of days I’d be laughing about it, but right now I had to figure something out. Water supplies were dwindling (I’d foolishly brought too little, not reckoning on it being such an oven) and I didn’t want to add myself to the list of those who’ve perished out here.

So, saddeless, and with the largest fork leg bag ever conceived, I got moving. At this point it was clear that to make reasonable headway I’d need to reach the smooth jeep track coming from Llica and if things really did get bad I’d at least have a chance of finding assistance. With a new course set and a couple more hours of sweaty, bumpy riding, I finally reached it. Hardly a bustling highway, in fact I didn’t see a single vehicle on it the whole time, but it signified salvation and the end of this potentially sticky situation. All I had to now was follow it to Isla Incahuasi, where an oasis of water and coca cola awaited…

The original plan saw me overnighting by the island and resupplying there, but by now dusk was approaching and it was clear I’d have to camp someway short of it. 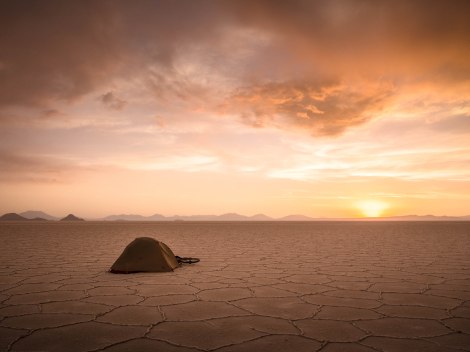 Not exactly a disaster though, easily ranking as one of my favorite camp spots ever. Watching the sunset over the incredible expanse of nothingness, knowing that there’s probably no one else for 10,000 square kilometers, is pretty awe inspiring to say the least. And ironically, I even found a good use for the broken seatpost, hammering tent pegs into the near concrete salt crust. 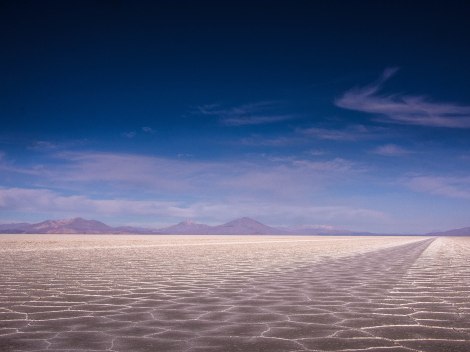 Awaking to a similarly impressive sunrise, I made quick work of packing up and getting on the road. The remainder of the water had been used up in the evening and I wanted to make headway before the sun became too fierce and temperatures soared…

Before long I was skirting past Isla Pescado…

And shortly after I caught sight of Isla Incahuasi itself, a sight for sore eyes and despite having to ride exclusively out of the saddle (as there wasn’t one there…) the lure of something to drink was enough motivation for me to blast through those last kilometers.

A group of bemused jeep tourists watched me appear from the abyss and ride onto the island, where I spent the next hour drinking copious amounts of mate (herbal tea) at the small café and explaining to the bewildered onlookers where I’d come from. Soon the small collection of jeeps had mushroomed into around 50, quite a contrast to the complete solitude I’d just emerged from and I took it as my cue to leave… 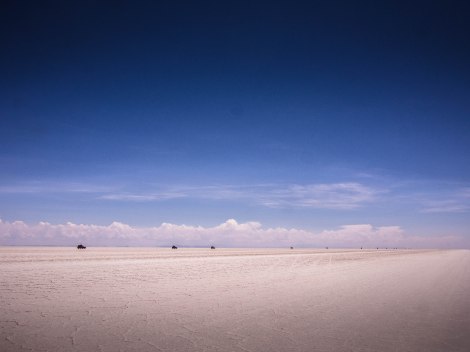 Time to hit the salt one last time and crank out the remaining 100km or so to the town of Uyuni, accompanied by a near continuous convoy of jeeps. At this point, if someone had offered me a lift I would have practically ripped their arm off, the prospect of more out of the saddle salt riding was hardly appealing by this stage, but in actual fact this last stretch turned out to be surprisingly rewarding. Hydrated and helped along by a tail wind, it was a time for reflection without any ‘survival’ concerns to distract from the sheer scale of it all

Rolling into the gringo hub of Uyuni I felt like a hero, time for some much-needed rest and a few cold beers, it was New Year’s after all… And in true Latin American ‘can do’ fashion this helpful chap even managed to concoct a ‘welded splint’ repair of my seatpost. Fingers crossed it holds up…

The standard route can be found here and is the one I’d recommend (despite taking a day longer), unless you are feeling especially adventurous….

It’s possible that a jeep track exists between Chorcaza (the village on the edge of salar de uyuni) and Isla Incahuasi or at least linking up with another of the primary jeep tracks. If this is the case this route would actually be very cool. I did almost no prior research and foolishly didn’t stop to ask anyone in Chorcaza about routes, instead just ‘following my nose’ to navigate through the maze of small islands and reach the open salar. May be someone else can do a better job of it in the future…

8 responses to “Riding The Salars (…Without a Seatpost)”