With so much time off the bikes we decided, in true fashion, to ease us ourselves back into things with the toughest route to date; 5 days bikepacking across the Andes from Chile to Argentina via a little used trekking route and two 4000m+ passes. Lovely.

Armed with minimal intel this was a classic tale of high adventure; limits were neared, a raging river almost claimed Sam’s bike, food supplies were exhausted and countless hours were spent carrying the bikes on our backs. The term ‘gluttons for punishment’ probably springs to mind, but amidst the suffering there was truly incredible scenery, cracking stretches of single-track and that unique sense of accomplishment that comes only from doing ‘something hard’…

Coffee and empanada; our last taste of civilisation before rolling out of San Gabriel and hitting the dirt 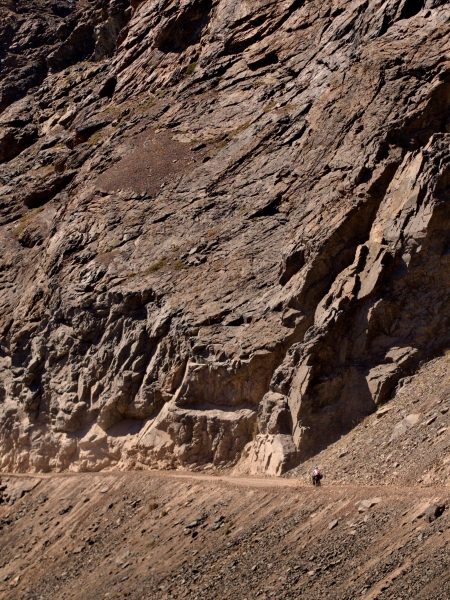 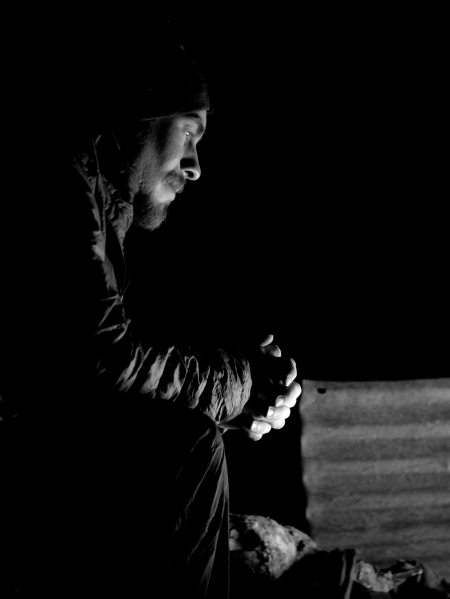 The following morning marks the start of the serious stuff; with the dirt road having petered out we’re left following vague trails up the valley side to the first pass, Paso Piuquenes.

Luring us in with some surprisingly rideable sections set amidst dramatic, multicoloured rock walls. 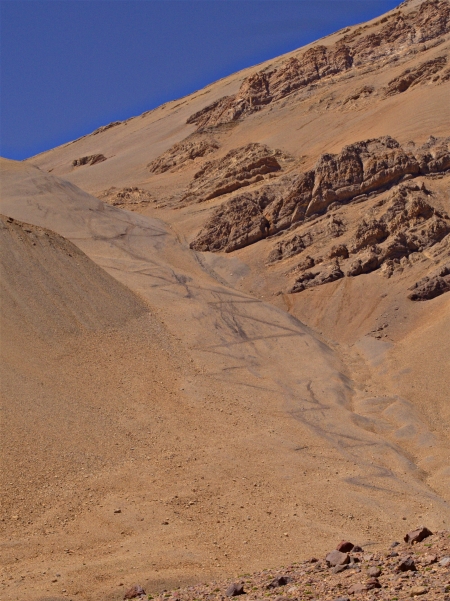 Before the slapping us in the face with this beast of an ascent up to the pass….

Seriously steep trails called for ‘bike on back’ mode to be adopted; basically like carrying a backpack, only infinitely more uncomfortable.

Quite a while later we made our exhausted, oxygen deprived arrival at the pass

Cresting passed can be like blind dating, you never really know what’s going to greet you on the other side, but fortunately this one turned out to be a stunner…

A slightly delayed 6pm lunch, was followed by a rip roaring descent

All brilliantly rideable, a race against the setting sun ensued to get low enough to camp 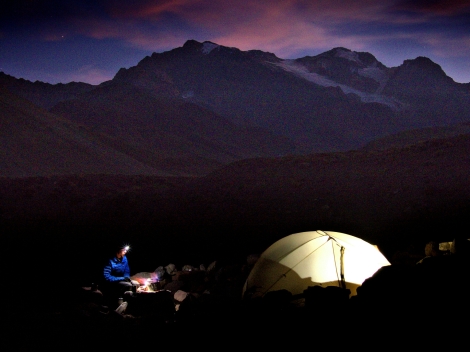 I’ve yet to see a cloud in Central Chile, which made for some stunning night skies…

Back on the bikes, for the most part it was rideable trails down the valley en route to the next pass

Not bad at all

The River Episode: By late morning we’d arrived at a river, one of many we’d already crossed, but this one proved to be a little trickier… A seriously fast flowing torrent which made it all but impossible to stand upright in. We’d read about a challenging crossing, but given that all those who’d gone before us had been on horseback things were a little easier for them. This was not looking good. Hours spent exploring upstream and downstream in search of a safer crossing point proved fruitless; we were either going to have to give it a try or turn back, both pretty unappealing propositions. Having satisfied myself that was possible to cross without any gear, although this was a pretty hairy exercise in itself, we decided to try it with the bikes. Sam went first, but things didn’t go particularly smoothly; shortly after taking the shot below he reached the deeper, faster section and lost control of the bike, resulting in both of us wrestling to stop it from being dragged downstream. A near miss and it was now painfully clear we weren’t getting across on our own. 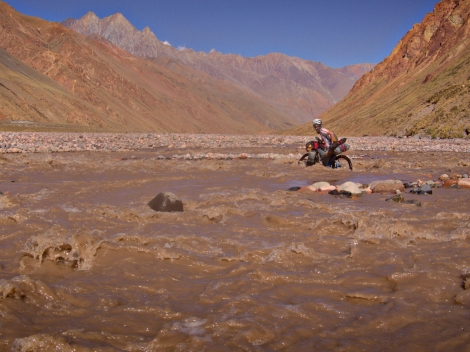 Having not seen a soul since leaving the road things looked bleak, but by late afternoon we spotted two men with horses coming down the valleyside in the distance. Realising this miracle signalled our way out, I splashed across the river and bounded in their general direction like a castaway who’s just spotted a boat. Given the less than ideal negotiating position I was in, the haggling went surprisingly well and before long the cavalry had arrived, loading our bikes onto the poor horse. An absolute stoke of luck and despite losing the best part of day we were soon safely over the side counting our lucky stars. Another tale for the grandkids…

Now a whole day behind schedule, an early start was called for the following day to make it over the final pass; Portillo Argentino 4350ish m. 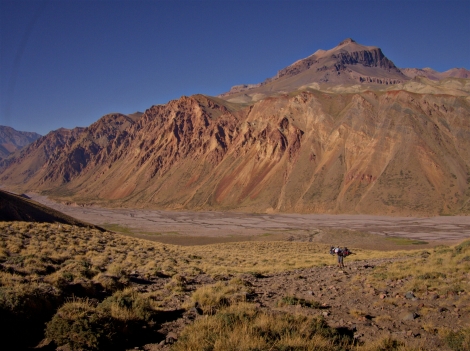 1500m of ascending lay ahead of us and as feared it was a total bitch. Stunning scenery though… 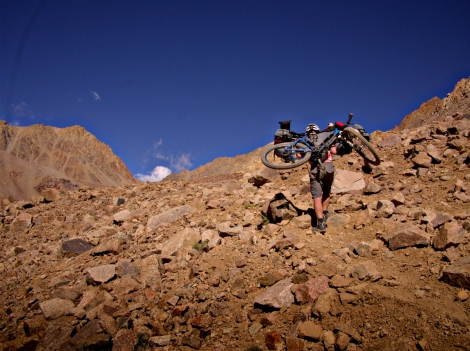 By late afternoon the pass was in sight but we were so fatigued from carrying the bikes for so long we couldn’t muster the energy to continue. A demoralising blow, made worse by the fact we were now at 4000m, well above any water sources and food was running desperately low.

There was nothing for it but to pitch the tents, conserve what little food and water we had left and get some rest.

Having burnt god knows how many calories that day, this humble burrito was all we could muster for dinner. Rationing was now very much in place.

Communicating mostly in nods, grunts and shrugs, we packed up the next morning, summoned what little strength we had left and made our final push to the top.

A definite ‘love hate’ experience, alternating between desperate moments and ones of complete awe. Physically we were on the edge, but really this, like most things in life, was all a mind game.

…before the final steep slog up to the top. Finally we’d broken the back of this thing (fortunately before breaking our own). 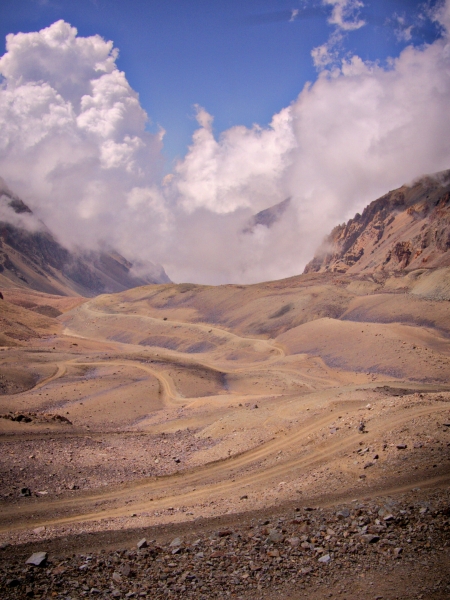 All that now remained was a blinding dirt road descent down the other side to the bemused Argentinian border guard.

The Beast; shaken but not stirred

Reaching the tiny village of El Manzano, we proceeded to raid the small convenience store, emerging with a mountain of Salami and cheese. Not quite the juicy Argentinian steak I’d been dreaming of, but a fitting feast nonetheless…

23 responses to “Bikepacking To Argentina‏”