This post is a little outdated, for my current setup see here and for more preaching about lightweight touring see here.

Sometimes I wonder if my passion for gear and bike geekery outweighs that of actually riding. Ever since going pannier free in Colombia, an act comparable to pissing on the bible in cycle touring circles, my daily musings have often revolved around how to modify the set-up further.

With the focus of the trip having now gravitated towards exploring remote dirt road and single-track routes through the Andes, the primary aim is to achieve as light and well distributed a set-up as possible. The current arrangement works well on the whole, but with the bulk of weight dumped high on the rear end, off-road handling isn’t exactly something to write home about. So, given that some friends were coming out to visit I took the opportunity to load them up with a variety of new bags for the bike, in addition, of course, to the usual offerings of contact lenses and a tyre (thanks John and Hannah). Drawing inspiration from the emerging ‘bikepacking’ scene my latest scheme involves severing the last connection with a traditional set-up by jettisoning the rear rack and basically sticking stuff all over the bike. The degree of faffing and number of iterations has been significant, but the prevailing incarnation is shown below:

Ready to hit up some Andean off-road routes

Space for food on remote multi-day jaunts is admittedly fairly limited, but there’s also a double-ended Alpkit dry bag waiting in the wings to strap onto the rear if needs be. I’m also packing a lightweight foldup rucksack, which I may end up using instead. 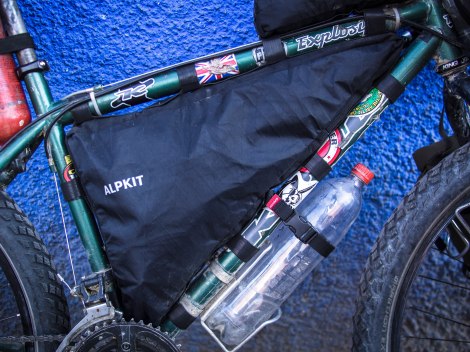 Although not quite the tardis I was hoping for the framebag is a very useful addition for stashing heavy items and keeping the weight low/central. 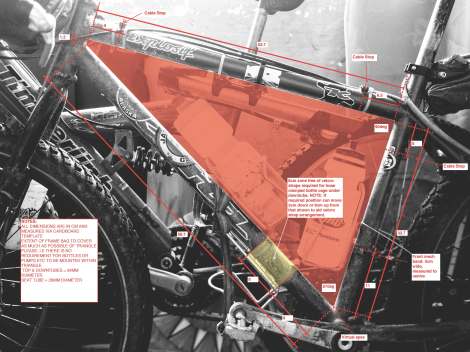 Sizing was based on my sketch, but I think the dimensions were treated a tad conservatively as it’s come out smaller than expected. This probably would have been avoided if I’d sent a cardboard template, as is usually the case.

On the front I’m sporting the roomy ‘Pocket’ from Revelate Designs and a Sea to Summit medium dry bag housing the sleeping bag and thermarest. A stem cap bottle cage mount from King Cage is another new addition to help with the tricky water storage situation.

An 8L Alpkit dry bag is lashed to each fork leg; hiking shoes in one,  and extra on the bike clothing for easy access in the other. 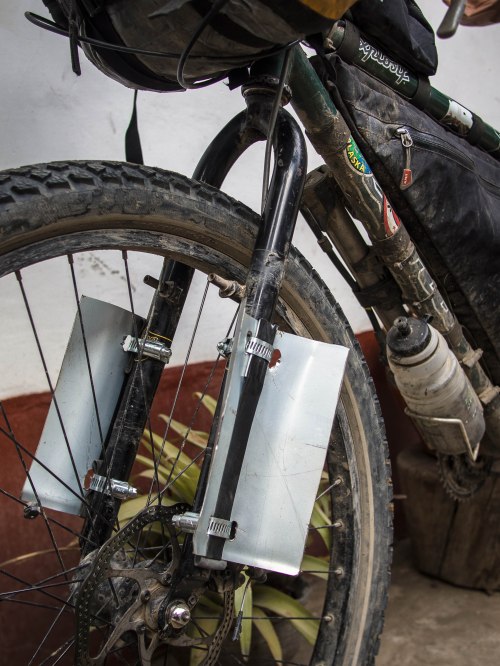 In the absence of a fancy ‘Salsa Anything Cage’ I’m using bent steel plates (cut to shape, with holes drilled for hose-clamping into position with a piece of old inner tube) to provide a little lateral support and prevent the bags from slipping round into the spokes. Note: I initially used half pieces of PVC tubing but these weren’t man enough…

At the rear, as opposed to a handmade seat pack from Alaska, I’ve simply lashed my other Sea to Summit medium dry bag to the connection points on the back of the Brooks saddle (quite handy). A bungee back to the seat post provides extra support and compresses the main bag against a smaller bag containing the tent fly (necessary so as to maintain leg clearance). 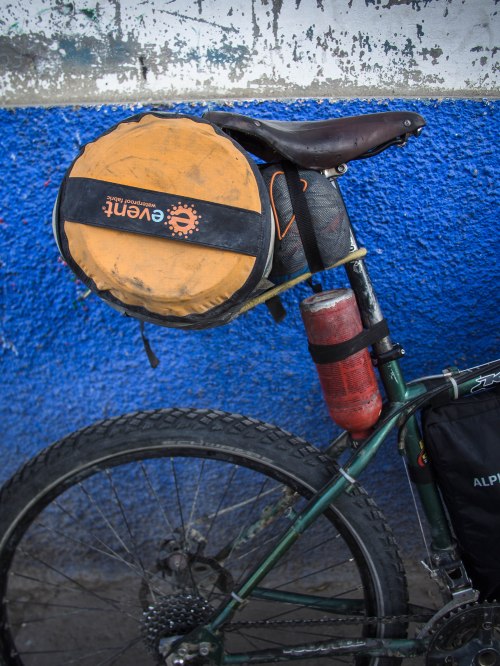 The result is surprisingly solid.

To complete the chaotic look the fuel bottle is stuck on the seat tube, using part of a broken bottle cage for support.

And the pump has found residence on the downtube…

If this isn’t enough gear geekery for you, there’s also an updated kit list here.