Taking time off from the bike and simply staying put for a while is, perhaps surprisingly, often one of the things I crave the most. This nomadic life can be unsettling after a time; constantly sleeping somewhere new, building connections only to subsequently have to sever them and start again from scratch a little further down the road. A yearning for familiarity is a deep routed human instinct and one that even the most hardened of travellers struggle to suppress. But with an anxious eye on my ever-slowing progress, the concept of ‘time off’ is often accompanied by a pang of guilt akin to pulling a sickie at work. This ‘must press on’ attitude is dangerous trap to fall into though and many a cyclist has been caught out, succumbing to the feared ‘burn out’ and throwing in the towel altogether. After all, this is a journey governed by the mind, not the legs.

This is a chief reason why Casas de Ciclistas, such as Santiago’s where I’ve recently been staying, are such a lifeline to wandering cyclists on tight budgets. And it’s not uncommon for people’s ‘couple of days’ stay to turn into weeks, as the comfortable grasp of familiarity slowly takes hold. It could have easily been a similar situation for me, but after a great few days catching up on some much needed rest, the prospect of exploring more dirt routes high in the Ecuadorian Andes was enough to lure me back into the saddle. What’s more I now had a like-minded partner in crime to share the adventure with, in the form of Sam, a fellow mountain biker from California. Having somehow wangled a two year break from his degree at Standford, he’s on a similar mission to ride as much of the Andes off-road as possible.

And so, after biding farewell to Santiago and family, we set off on a 10-day assault of Central Sierra dirt routes in an attempt to link the two iconic volcanoes of Cotopaxi and Chimborazo. The ensuing adventure was of such epic proportions (that’ll be the US influence rubbing off) that I’ve split the blog into a two-part odyssey so as not to overwhelm: 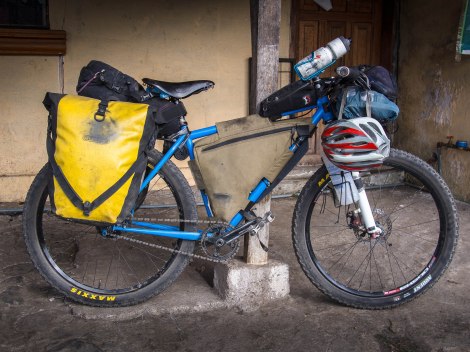 Bike envy: Sam’s self-built frame from Columbus tubing, with Fox forks and Rohloff internal gear hub. Basically the stuff of dreams for any non-bike geeks out there.

A bonus tent for the obligatory night camp shot as we head out of town up into Cotopaxi National Park.

As always with a cycling partnership the ‘get to know each other’ period (not to be confused with honeymoon period) is a fairly rapid one. Before long the polite indecision (“are you sure this is ok with you?”) has been substituted for a higher level of communication largely comprising of nods and grunts. 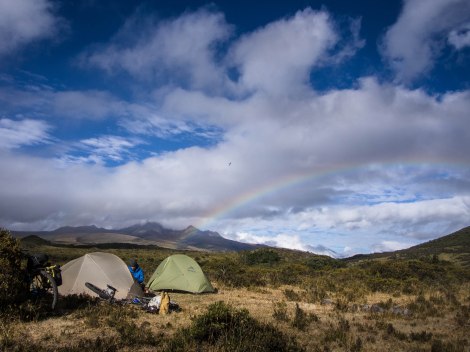 The morning of Day 2. The blue skies and Disney rainbow disguise the true wind-chilled reality of this exposed camp spot at 3300ish m.

Against a brutal head wind we crept towards the elusive hulk of Cotopaxi, buried somewhere in the clouds.

Occasionally she teases us with a cheeky flash of her base…

Closing in we almost get a full frontal, and contemplate spending a night on the windswept 4000ish m plateau in the hope of the cloud clearing, but decide to drop down to warmer climes….

And find a more sheltered, if slightly less picturesque camp spot outside an egg box factory near the town of Lasso. Still, we manage to catch a glimpse of the summit in the distance as the clouds finally decide to clear.

Day 3 started with another classically Ecuadorian cobbled stretch, the kind where you check all you teeth are in place at the end, as we headed deep into the Central Sierra – the indigenous heartland of Ecuador.

Shearing with the kitchen scissors 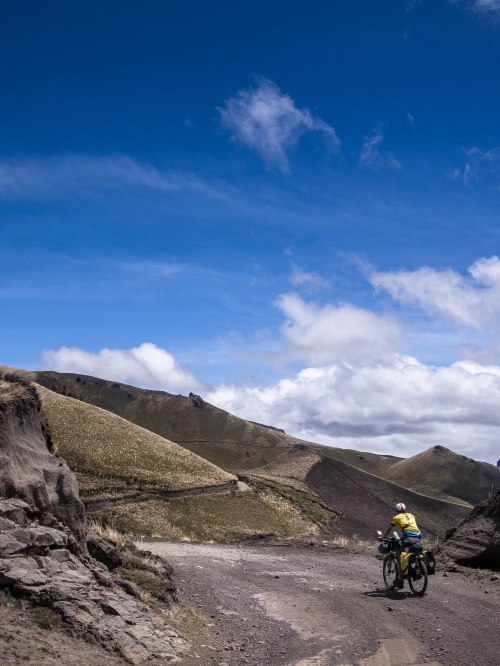 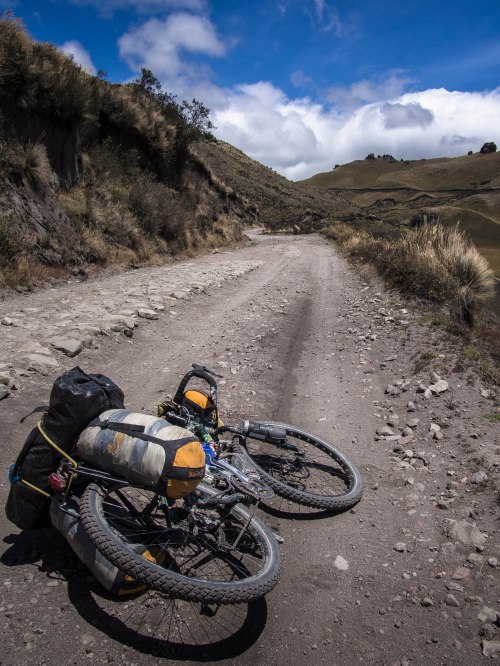 Dirt road perfection. Not a hint of traffic to rob you of that racing line on the switchbacks as we plummet down to the village of Isinlivi, our target destination for the day. 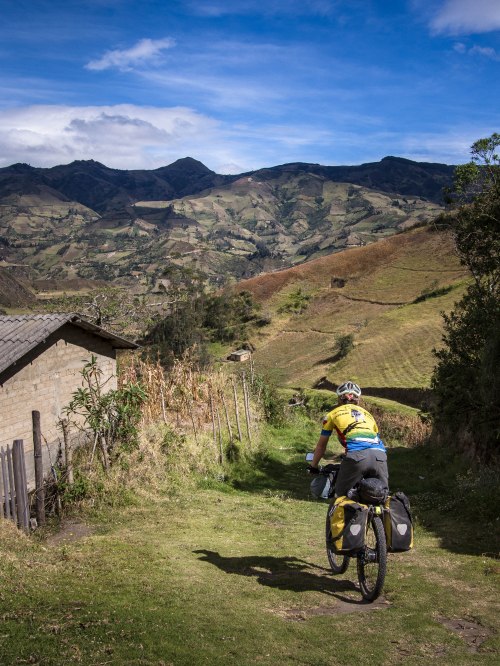 Off-road meanderings are a fairly slow paced affair, as demonstrated by the fact that a pregnant dog accompanied us for the entirety of Day 4. 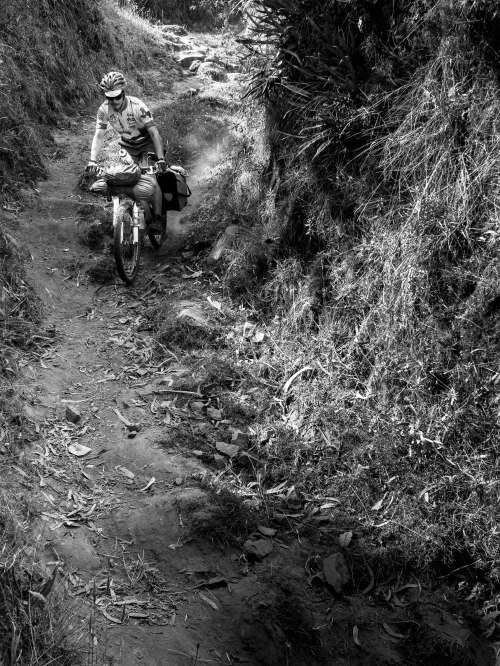 Our intention was to try and forge a route direct from Isinlivi to the Crater Lake at Quilotoa; possibly a world first. Finding our way based largely on quizzing any locals we came across, we strung together the makings of a cracking single-track/jeep track route. 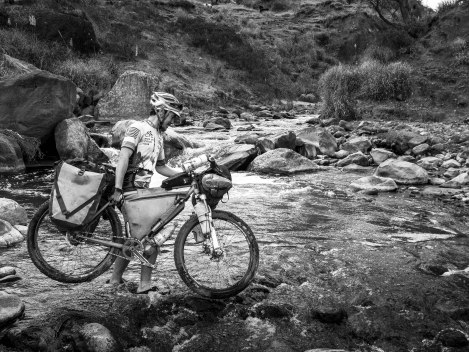 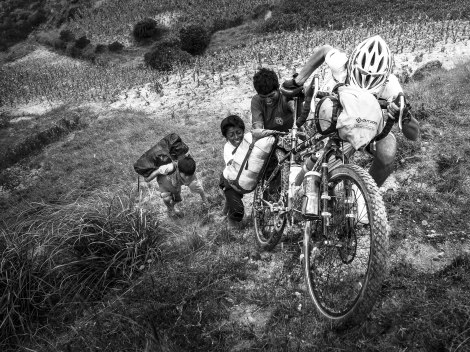 Our less than elegant river crossing attracted the attention of a few bemused kids, who, in return for probably the best entertainment ever to reach their isolated valley, helped us up the other side and pointed us in the direction of a connecting trail. (Photo courtesy of Sam)

A bit more pushing ensued until we were finally on a something that was rideable and shortly after, ravaged by hunger, practically bought out an old lady’s small shop in the village of Pilapuchin. 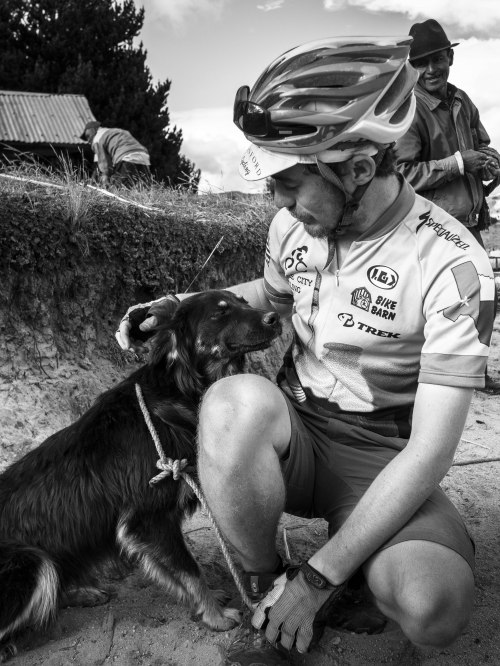 Throughout these antics our trusty canine had unquestioningly followed along and seemed to show no sign of losing interest anytime soon. As amusing as having a pregnant dog tag along was though, we were pretty sure we weren’t best suited to taking care of this ‘bitch’. We were therefore quite relieved when, just as the day was drawing to a close, we managed to find a chap willing to take her off our hands.

A surprisingly forlorn farewell ensued before handing her over to her new owner and we then watched as she was practically dragged off to his house, half wondering if he was simply going to eat her… 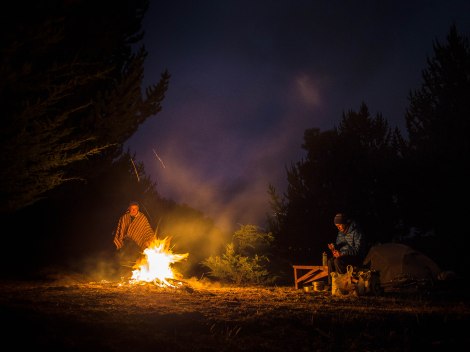 Given what a saga the day had become we ended up camping about 3km short of Quilotoa. A friendly chap offered to let us camp on his land and then proceeded to make us a full-on bonfire. Brilliant. 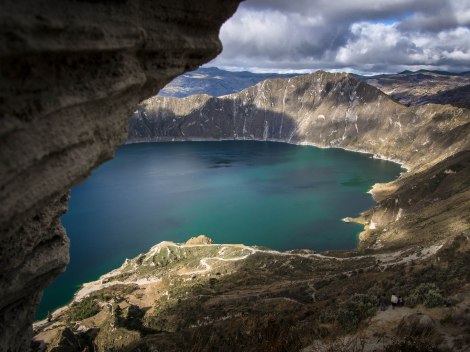 The following day thus became only a short climb up to the usual 4000m mark, to the tourist hotspot of Quilotoa. As a classic Lonely Planet ‘Top 20 Don’t Miss Mega Attraction’ the Crater Lake is undeniably pretty stunning…

There’s basically two ways of reaching the North Gate of the park:

From the North Gate there are a further two options:

A relatively easy day’s ride at around 50km and an absolute cracker. Just branch off the paved road to Sigchos a few km after passion through Toacazo and take the road heading towards Yanaucu Grande. It’s cobbled at first and then paved. From Yanauca Grande is a cracking dirt climb up to a 3900m pass before plummeting down to Isinlivi, where you’ve got a choice of two hostels, with Llulu Llama seemingly the favourite.

Cass eluded to the possibility of such a route in his account and we thought we’d try and make it happen. One for the off-road, lightweight crowd, but definitely worth considering if seeking high adventure and a lesser travelled route. It’s 35km, which is actually a full day due to the challenging terrain. In terms of route finding I’ll do my best to outline things below but as always the best approach is simply to keep asking locals for directions: