I could have easily spent longer resting in the small town of Jasper, but the weather window was inching shut and I was eager to get going. As someone who has a tendency to worry I knew I wouldn’t be able to genuinely relax until I’d made it through the Rockies.

The first part of my route followed the incredible ‘Icefields Parkway’, which, as roads go, is an absolute blinder. Winding it’s way high into mountains, often at over 2000m elevation, it affords spectacular views of big snowy peaks and imposing glaciers. It is however, a trip that’s probably best made in the summer, since at this time of year it gets bloody cold, with biting winds blowing relentlessly off the icefields. Not such a problem if you’re in a heated RV taking photos through the window, but it can make life pretty tough for the intrepid cyclist.  Even wearing six layers I was chilly, generally struggling to register feeling in my toes for the first part of each day.

Heading up the Sunwapta Pass

Rather optimistically I camped the first night, but after waking up to a completely frosted tent and solidified water bottles I wimped out for the subsequent couple of nights, opting instead for cabins and ‘wilderness hostels’. The budget took a hit, but it was great to be able to warm up in the evenings; in one place I even found myself sat in a wood fired sauna with a great bunch of other travellers. My body must have been in a state of complete confusion as it was hotter than the sun in there, largely thanks to some impressive wafting by a French chap (earning himself the title ‘sauna boy’). These sessions were interspersed with daring trips to a nearby creek; running across the site like a bunch of crazed half-naked warriors charging into battle. Any perceptions of machismo were however, quickly dispelled by the girly shrieks which followed our brief encounters with the freezing water, almost immediately scampering back out and returning to the sauna post-haste! 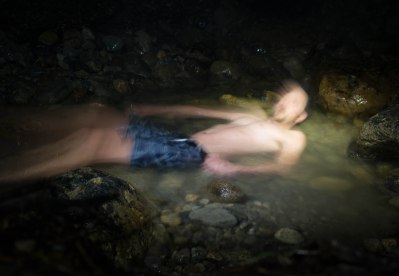 ‘Creek Dunking’ (This photo conveys the shock of it quite well!)

Hiking with the Sauna Crew near Lake Louise

As spectacular as the snow covered scenery was, the Rockies certainly took their toll and rather inevitably I developed a bad cold shortly after leaving the Icefields Parkway (possibly not helped by the sauna-creek antics…). At home I’d have been off work, curled up in bed with a Lemsip, but instead I found myself slogging up another mountain pass in the snow – it was bloody miserable. My bike computer decided to give up around the same time, simply displaying ‘SLEEP’ on the screen. Probably sound advice, but realistically I had to push on to the next town before I could take any time off. There was little in the way of accommodation along this stretch and a cold, damp tent is the last place you want to rest when you’re ill.

I rolled into the town of Revelstoke a shivering mess and felt quite bad subjecting myself on Shane, the Irish chap I’d arranged to stay with. I needn’t have worried though; Shane and his merry band of housemates were a bunch of legends who were happy to let me crash until I’d recovered. All adrenaline junkies from around the world, they’d converged on this small town to shred the hell out of the surrounding mountains each winter.  There was a cool ‘vibe’ and visa issues were a running theme to the point I almost felt guilty having a valid one! It was refreshing to be amongst people so focused on following their passion. Shane, for instance, had left what for many represents a ‘successful’ life working in finance for a corporate giant, to pursue his dream in the mountains. Minimum wage evening jobs now leave the days free for climbing in the summer and skiing in winter – a brave transition, which seems to be working out pretty well. 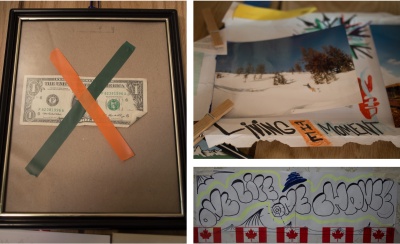 Fortunately my cold was quick to pass and I was able to enjoy my ‘fly on the wall’ taster of life here, doing normal activities like going bowling and getting a hangover. I could have easily stayed longer but I knew it was time to hit the road, so I bade farewell to yet more fleeting friendships and set off in search of the big city lights…

Shortly after leaving Revelstoke I, by chance, ran into two other touring cyclists at a Tim Hortons. For the uninitiated this is a classic Canadian coffee chain that has become an integral part of my trip – a holy grail of cheap coffee, cakes and free wi-fi! It was therefore quite fitting that I should meet James and Ryan here, who, in addition to sharing a comprehensive knowledge of Mr Horton’s entire menu, were also bound for Vancouver, the finale of their Trans-Canada trip. This was all very exciting as I was convinced I was the last cyclist this far north! After the obligatory swapping of stories, comparison of bike setups and expressions of hatred against our common foe, the headwind, we decided to join forces. 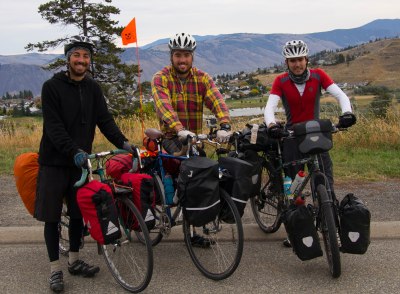 And then there were three

Travelling in a group was quite a novelty and it was great to have some company. Fortunately we travelled at broadly the same pace and shared a similarly low budget approach, resorting to camping out behind a church in one town. Being Canadian they were however, addicted to ice hockey and initially it seemed each evening we were either racing to a town to catch a match on TV or watching a local game. Whilst there wasn’t as much fighting as I’d been led to believe, I will admit it was pretty entertaining. 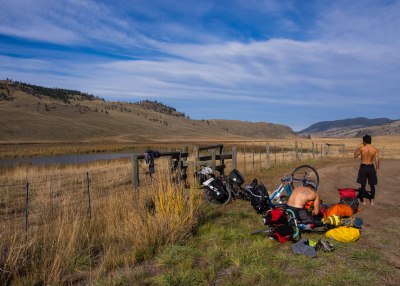 Saddle choices from the top: Brooks, Brooks, and ermm…. something wrapped in a towel with ‘leopard skin’ duck tape!

Although now clear of the Rockies, the weather was still very changeable; ranging from hot sun in the desert like area around Kamloops, to torrential rain and hail when crossing the Coastal Mountains. The later involved a 40km decent to our destination for the day, which sounds like a good thing, but when you’re soaked to the skin the wind chill is a killer, quickly turning us into shivering wrecks. Given that it was James’ birthday, and so far was almost certainly his most miserable ever, we splurged on a motel room and promptly occupied the hot tub sipping whiskey and cokes!

Punctures 3 & 4 : Constantly being screwed in the rear

For James and Ryan Vancouver was their ultimate goal and we overcame fatigue and hangovers to push through the final 100 miles. They were men on a mission and we barely stopped all day. For me Vancouver was also a fairly significant milestone, albeit a subconscious one; it represented the end of the big, scary ‘North’ – I’d made it through relatively unscathed, emerging smiling and ready for more. Sitting now in a downtown café sipping a latte, the wilds of Alaska and the Dalton seem a world away.  A quick look through my diary at the scribbling’s of a desperate man soon bring it back though, serving as a poignant reminder of those tough first weeks. It’s fair to say I’d completely underestimated this part of the trip, both in terms of how challenging and also how rewarding it would be, two words which are inexorably linked when it comes to adventure. 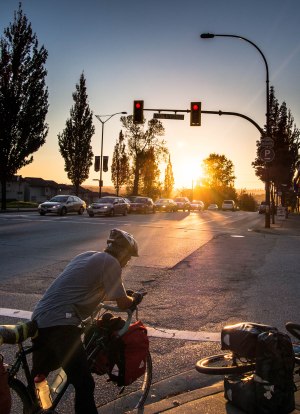 I’m currently staying in North Vancouver for a couple days or so with an amazingly friendly couple, Jane and Ian, who have already helped no end – yet another example of the incredible hospitality that has made this trip possible. So far my time has been split between exploring this beaut of a city and working my way through a rather lengthy list of jobs which have accumulated over the past couple of months; service bike, repair tent and panniers, claim medical expenses etc. Not exactly overwhelming stuff, but certainly more involved than my typical routine, which effectively boils down to eating and riding. The plan is to spend the coming Thanks Giving weekend with Jane and Ian up in nearby Whistler for some ‘proper’ biking, before cracking on with the Pacific coast leg of the trip back in the good ol’ USA.  Bring on those super-sized meals…

[Note: For any prospective cyclists, there’s much discussion on the internet about how to avoid paying the rather extortionate Jasper and Banff park fees, with some advocating pretty extreme measures such as riding along train lines to avoid the gates. I simply employed the ‘smile and wave’ approach and basically cycled round each gate at some speed without stopping. This worked well; either they didn’t care or simply assumed I’d already paid! ]

11 responses to “The Last of The North”